A Tale of Two LEGOs: Why Central Planning is not the Solution for DCFC Distributed Infrastructure

I first encountered the LEGO® wind turbine in 2002. It was not yet commercially available, and I was lost in admiration (LEGO people for scale, and yes, I will be capitalizing and adjectivizing LEGO; Some things are just worth doing right).

Look at that thing! That is a LEGO set that needs central planning. It’s two hundred bucks and waist-high. You’re spending a lot of money on something that takes a long time to build—so you better have cleared both the budget and location with all the stakeholders in your house before you move forward.

That is a much smaller commitment, both in terms of physical space and capital commitment– and it can go anywhere in the house, without a family budget meeting first.

There are a few lessons here when it comes to EV infrastructure. At EVgo, we’re very aware of the need to aggressively deploy more infrastructure – and we’re moving quickly on big programs on top of our already nation-leading network. But there’s an assumption that comes up in these discussions.

When people think “infrastructure,” they think of the big wind turbine (or bridge or airport), which is something you probably do need to build according to a rigid, central, and specific “five-year plan” set out by a government agency. However, the best design for EV infrastructure is more nimble—implemented in smaller chunks over periods of time to meet the evolving demands of all the players involved.

When it comes to EV charging infrastructure, the most efficient role for centralized planners is just this kind of guidance and targeting. It makes little sense for governments and utilities to specify the precise locations and technology configurations of EV charging. Doing so will inevitably lead to programs that overspend and commission suboptimal technology.

Central Thinking is an Obstacle to EV Infrastructure Growth

Many of the stakeholders at the table deep in their DNA think of planning infrastructure. In fact, utilities, for example, are required to do so to obtain regulatory approvals. Similarly, when the state DOT is in the mix, their main priority is putting together a cost-efficient long-term plan. And finally, program administrators have often been told to come up with a “plan” in order to define scoring criteria or obtain funding.

These players are well-intentioned and very smart – but they’re thinking about infrastructure the old way.

People need EV charging to make it to their destination – but they need coffee and bathrooms too and no one demands a 5 – year strategic plan for "bathroom ready interstate corridors." We need lots more charging infrastructure the same way we need lots more solar roofs – with an overarching goal, rather than a list of permitted addresses and rigid requirements.

The Map is Not the Territory

One example of a conventional approach that should be rethought is to specify “hard line” exit distances and radiuses for incentive programs. I get it. I use the same software. It’s simple to think “yes, this 2-mile radius around each highway exit is exactly where a charger should go,” but we can do even better – balancing travel distance, site host power availability, and local utility rates. Balancing this set of ingredients is the heart of what we do for a living at EVgo!

We have seen state agencies say that a charger in front of a craft store in a shopping center would serve the highway-traveling public and therefore should be grant eligible – but not if it were in front of the grocery store 300 yards away. Sure, it saves 40 seconds for the highway traveler, but the local apartment dwellers would probably prefer to duck in and get some detergent instead of a birdhouse kit.

We’ve also seen full state grant plans find no takers if they are over-specified. Hard radiuses and specified addresses force charging companies like EVgo to design around state criteria that may or may not have EV driver convenience and amenity front-of-mind, rather than leveraging what we know from 10 years of building and operating a network of >800 stations for more than 220,000 actual EV drivers.

One great practice we’ve seen is Florida offering the most credit for chargers right on the highway, but some credit as much as 5 miles away. North Carolina’s detailed rubric is another example of a state with clear, overarching program goals, but also a willingness to build in flexibility so that the minutiae of project planning can rest with experienced developers, owners, and operators of charging infrastructure.

EV Charging is Not Only for Highways

EV charging serves communities and the drivers who live in them

Take time with this one. If you have residents without a driveway or garage (and that’s about 30% of Americans) – or if you want electrified rideshare in your city – you’ll need a lot more fast charging away from the highways than on them. The same way there’s a place to get coffee every 100 miles on the highway – but one every 6 blocks in the city - the city dweller whose nearest fast charger is 40 minutes across the city is just as ill-served as the one who finds herself without any along her 200-mile Thanksgiving drive.

However, we sometimes find a well-intentioned state program demands and requires that we place a charger, say, precisely 30 miles outside a city. It’s helpful to consider some "user stories" in that case:

Our origin-destination data shows that when people travel a long distance they’re most often heading towards or through a big city. That means the same way that downtown hotels serve travelers just as roadside ones do, downtown chargers serve travelers on long highway trips. We're constantly crunching lots of data on future vehicle ranges, customer behavior, and the like to determine where corridor charging should go - and the answer's not usually "every 50 miles on the dot, at the end of the exit ramp."

Thankfully, states like Maryland and Colorado have acknowledged this reality – and have released community plaza programs alongside highway corridor programs; we need both to enable ubiquitous EV adoption.

A Place is More than a Location on a Map

EVgo sites our chargers to match typical dwell time at a location based on the amenities nearby.  Our research suggests that 60% to 80% of our customers like to shop while they charge. Activities that require about 15 – 30 minutes of parking time (i.e. grocery shopping) are often better fits than siting chargers adjacent to a bank of ATMs.

EVgo works with site host partners like Whole Foods, Albertsons, Kroger, Walmart, and myriad others. Some site hosts are easier to clear approvals with than others, and some shopping areas have sufficient electric power for chargers in the front while others only have it in the back. The takeaway is that two locations that are a few hundred yards apart can be worlds apart in driver experience.

Flexible siting lets us turn charging into a 2 minute experience (setting up your charge on the way to get your burger) - not 45 minutes sitting in the car on the median somewhere.

Forecasting the Need for Fast EV Chargers to Meet Demand

Another aspect of some EV charging plans is the belief that: “since we anticipate massive EV adoption by 2030, there is an infrastructure crisis today," or that State X is “behind” in fast charging because they have fewer chargers than State Y.

It's very true that we need to build ahead of the market - but not ten years ahead. Ideally the infrastructure not just reassures drivers but also gets used by them, such that the capital invested can deliver a return.

By way of reference, the most successful market for EVs today is California – with 80% of the EVs on US roads and about 200 cars per charger.

If you're on the right side of this graph, and most states are, car for car you have more fast charging infrastructure than the most successful electric vehicle state. Even that might not be enough - we all have map miles to cover and not just people - but it's absolutely something you should keep an eye on when you think about pace.

Below - we leave out the "walled garden" of Tesla Superchargers, and dealership / nonpublic charging, but I've given the pic without Tesla cars (top) as well as with them (bottom.) 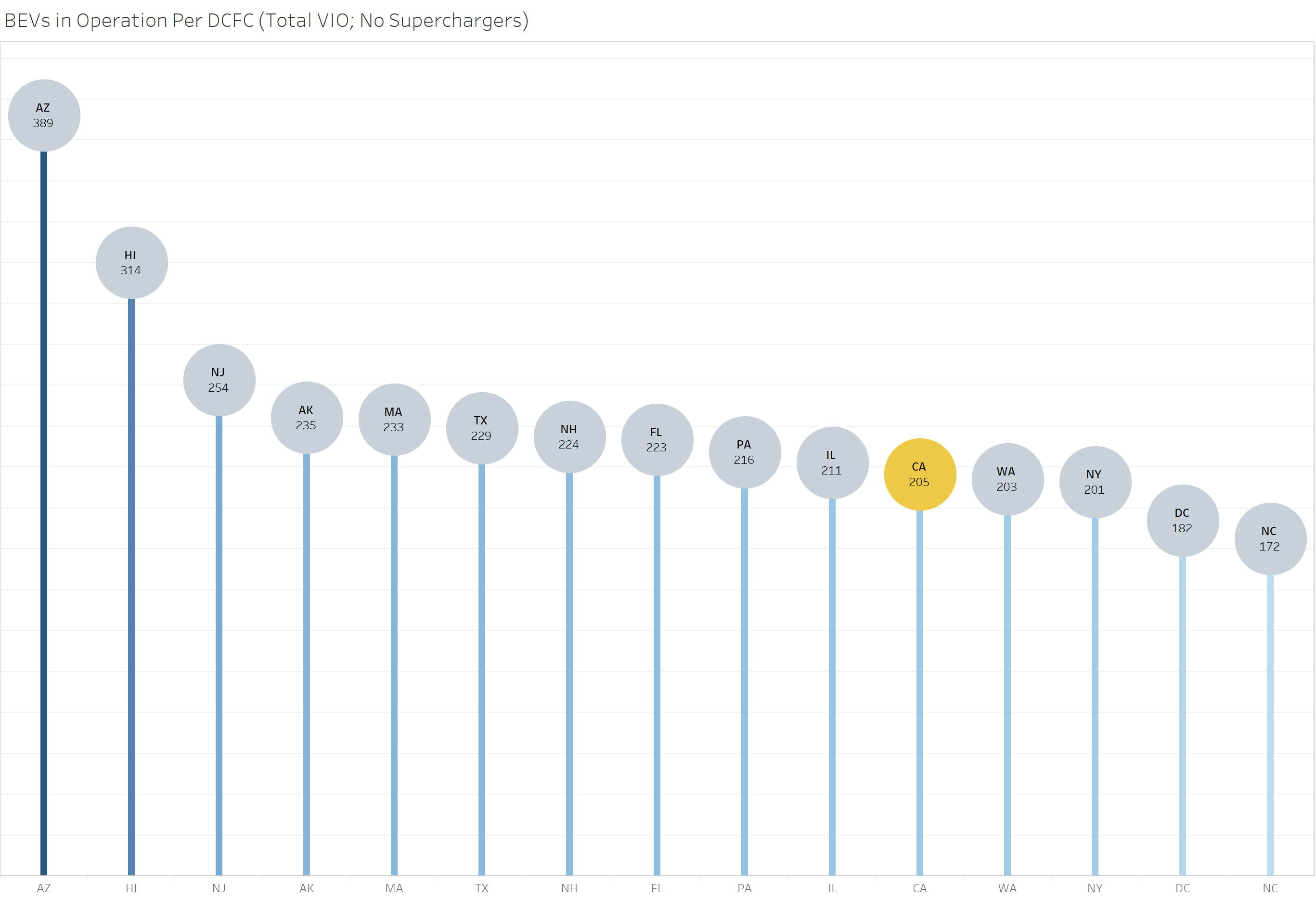 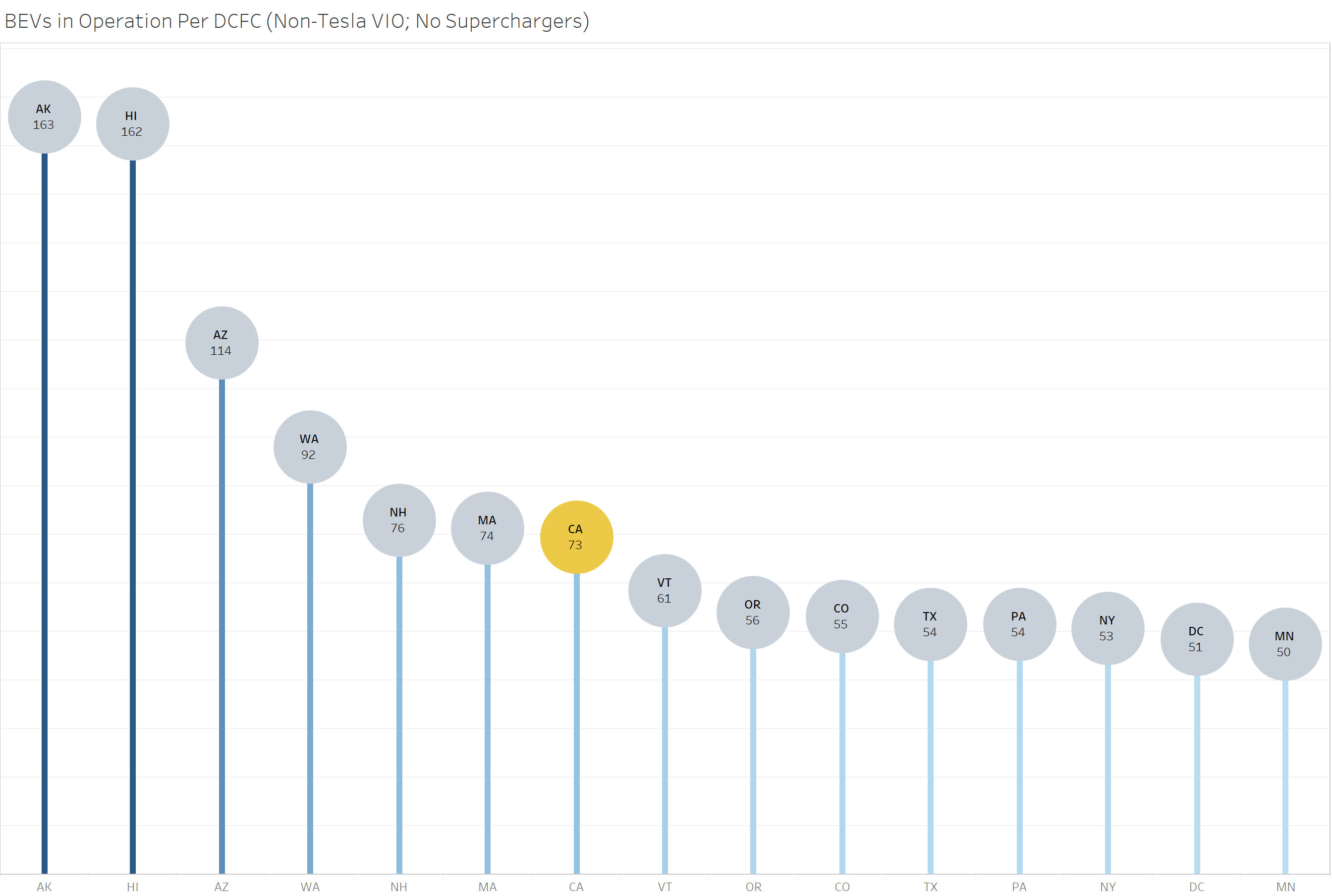 Similarly, we also often see a push to meet FHWA corridor guidelines of “one DCFC every 50 miles.” That’s a fine goal! But by when? Program planners need to consider not just geography, but also supply-demand balance.

For many states with sparse EV adoption today, an incremental phase-in of charging infrastructure will let you build more infrastructure - leveraging public dollars with private rather than doing it all with public money “hurry up and wait” basis.

The Problem is Big. It's also Very Solvable.

Again, centralized and distributed infrastructure are different. If you think your interstate will be at capacity in 2031, sure, you should start the plan for the expansion in 2021. However, the total development cycle for a DCFC is only 6 to 18 months, and the construction budget for a DCFC location is more like a single-family home than it is like an interstate.

Growth like we’ve seen for rooftop solar – constant, steady 20-50% growth compounding annually – would keep up with demand. By way of contrast, states that hope to expend their effort to support EV infrastructure based on a one-time plan released in 2021 may find themselves wishing they had left room for iteration—and to take advantage of shifts in technology—in 2022, 2023, 2024, etc...

EVgo’s partnership with VA DEQ, for instance, extends over five years, but it has many degrees of freedom. Regional guidelines ensure there are DCFCs statewide, with individual locations often only being named 6 months in advance as the company and the Commonwealth both learn more about usage. We also see programs move to multiple smaller cycles per year instead of one mega-award. (See much more about best incentive practices here)

Policymakers and planners who approach EV fast charging infrastructure similarly to multiyear, “big iron” projects could find themselves with a network of too many chargers in one place and too few chargers in another. Or, if a plan is created all at once, it won’t leave room for any new insights to adapt to the evolving market.

By contrast, programs that use flexible guidelines, use weights and scoring, and implement charging infrastructure in smaller chunks over time will be able to achieve their electrification goals more successfully. And their LEGO Businessman in the Orange Car will be able to easily drive from the skatepark to the ice cream truck to… I guess that’s a… mobile Neanderthal exhibition?