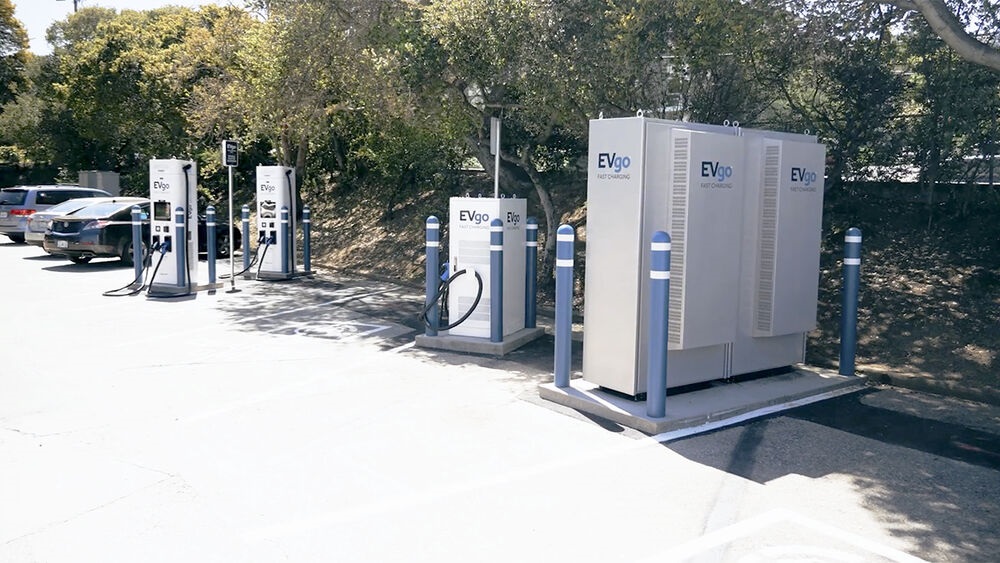 New sites in California, Florida, and Washington part of agreement to triple EVgo’s network with development of 2,700+ new fast chargers by the end of 2025

LOS ANGELES - April 28, 2021 – EVgo (or “the Company”), the nation’s largest public fast charging network for electric vehicles (EVs) and the first powered by 100% renewable energy, announced today it has opened the first three fast charging stations from the Company’s collaboration with General Motors (“GM”) to triple the size of its current network.

In July 2020, GM and EVgo announced plans to accelerate widespread EV adoption by adding more than 2,700 fast chargers in markets across the country through 2025. EVgo and GM are already delivering on that commitment with the first stations online and available to the public. The new fast charging station locations include four stalls at Carlmont Village Shopping Center in Belmont, California, six stalls at Oakwood Plaza in Hollywood, Florida, and two stalls at Ballard Blocks shopping center in Seattle, Washington.

“GM agrees with the customer need for a robust charging experience that makes the transition to an EV seamless and helps drive mass adoption,” said Travis Hester, GM’s chief EV officer. “As we launch 30 EVs globally by the end of 2025, this collaboration is expected to help create consumer confidence and excitement about the EV future. These new stations are the first of many to come, as we work together with EVgo to offer EV owners more options for charging.”

“The financial support GM is providing to EVgo has accelerated our station deployment plans in 40 metropolitan areas across the US,” said EVgo CEO Cathy Zoi.  “By year-end EVgo expects to have approximately 500 stalls from the GM/EVgo collaboration live, and we are just getting started.”

All of these new EVgo sites deploy cutting edge power sharing technology, including fast chargers capable of delivering up to 350 kW.  This means that the sites could provide 150 miles of range in [8-12] minutes1 for new 350kW-capable EV models coming to market. Further, as evidence of GM and EVgo’s commitment to accelerating transportation electrification for all drivers, each of the sites has both CCS and CHAdeMO connectors, making it easy to go electric regardless of vehicle model.

The new sites with GM are the latest in a series of announcements showcasing EVgo’s momentum, as the company grows its customer base and extends its network footprint. Most recently, EVgo celebrated the opening of fast chargers in Washington, D.C. and Maryland and was also awarded grants to support the development of new fast chargers in New Jersey and Pennsylvania.

EVgo is the nation’s largest public fast charging network for electric vehicles, and the first to be powered by 100% renewable energy. With more than 800 fast charging locations in 65 metropolitan areas across 34 states, EVgo owns and operates the most public fast charging locations in the US. and serves more than 235,000 customers. Founded in 2010, EVgo leads the way on transportation electrification, partnering with automakers; fleet and rideshare operators; retail hosts such as hotels, shopping centers, gas stations and parking lot operators; and other stakeholders to deploy advanced charging technology to expand network availability and make it easier for all Americans to enjoy the benefits of driving an EV. As a charging technology first mover, EVgo works closely with business and government leaders to accelerate the ubiquitous adoption of EVs by providing a reliable and convenient charging experience close to where drivers live, work and play, whether for a daily commute or a commercial fleet. EVgo’s parent company is LS Power, a New York-headquartered development, investment and operating company focused on leading edge solutions for the North American power and energy infrastructure sector. On January 22, 2021, EVgo announced that it entered into a definitive business combination agreement with Climate Change Crisis Real Impact I Acquisition Corporation (“CRIS”) (NYSE: CLII). For more information visit evgo.com and lspower.com.

LS Power is a development, investment and operating company focused on the North American power and energy infrastructure sector. Since its inception in 1990, LS Power has developed, constructed, managed or acquired more than 45,000 MW of power generation, including utility-scale solar, wind, hydro, natural gas-fired and battery energy storage projects, and has developed more than 660 miles of high voltage electric transmission. Additionally, LS Power actively invests in businesses focused on renewable energy and renewable fuels, as well as distributed energy resource platforms, such as CPower Energy Management and EVgo. Across its efforts, LS Power has raised in excess of $46 billion in debt and equity capital to support North American infrastructure. For more information, please visit www.lspower.com.

1 The speed with which an EV can charge and its efficiency are determined by its overall size as well as battery size and charging capabilities of the vehicle itself. Currently there are no EVs on the market that can accept 350kW of power.  However OEMs have indicated/announced development of new models with up to 350kW capability will be available in the next few years.