By Colin Murchie, Senior Director of Business Development at EVgo

As the EV industry continues to mature, we encounter more and more "conventional wisdom" that is neither true nor wise. "EVs are only for rich people." "The grid can't handle fast charging." EV charging companies don't serve low-income communities." The fact is, none of these are true, but we must be cognizant and vigilant to ensure that the shift to EVs can be taken advantage of by everyone. Let's unpack what that really looks like and check in by way of grading ourselves.

The Story So Far

We went into more detail about this last year, but we set our goal in the units of "Serving" "Impacted" communities, and we decided to define and track that as:

At EVgo, we grade ourselves using the “state percentile” function in EJscreen. Roughly, we’d like to know whether the Census tracts we serve are, in fact, less diverse, more affluent, or have cleaner air than the ones we don’t – and we want information about what neighborhoods to serve, not which US states.

We hear you gearing up in the comments section. No, maps and metrics aren’t everything. But they’re a decent start and a very good tool…and I’d say they might be minimum criteria for being taken seriously.

We buried the lede; EVgo met our goal for 2021. We pledged to watch the metric above and increase it quarter over quarter, putting our money where our mouth is. At the beginning of the year, the average PM2.5 EJScreen demographic score within a 10-minute drive of EVgo chargers was 45%; now it’s 51% and increasing. So, we hit the goal. The neighborhoods we serve are slightly more diverse, less affluent, and are slightly more impacted by air pollution than the average neighborhood in that State.

Why we’re doing well and where

First, our natural site selection algorithms don’t select against low-income communities the way some might think. They do select for high quantities of EV registrations (and there’s some income proxy there, though not as much as you might think – especially once you exclude Tesla).

They select against single family homes, however, given at-home charging options, and they select for both traffic and density. They are also saturation conscious; so to put it bluntly, even if we or others did serve richer neighborhoods first, the algorithms encourage us to spread out afterwards to serve even more vehicles.

Our goal was to amplify that trend, so we inserted the EJScreen score directly into our site scoring and site selection GIS tools. We did that both opaquely – the “scores” that EVgo site developers see as they compare one site to another include a weight of EJScreen in a way that is “baked in,” and transparently – developers and their managers can also view EJScreen as a layer in our internal GIS tool, and it regularly appears at internal investment committee meetings. That can arm an EVgoer to advocate for a site or help us if we’re trying to correct for an internal bias.

Let’s look at some of the results and dive into a few key areas – Phoenix, Seattle, Los Angeles and Detroit.

Phoenix: In the map below, existing stations are blue dots surrounded by light blue “drive areas.” Stations underway are blue diamonds. EJScreen is in a scale from transparent (below 50%) to bright red (highest possible score). 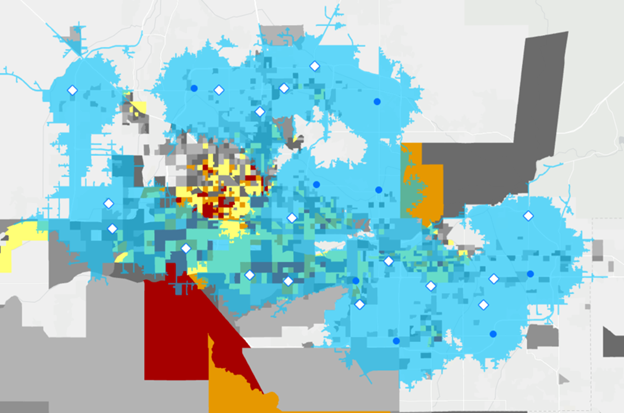 You can see how our “legacy” network built out in areas that are largely transparent; and you can see that in some of the new stations too; but in general, we’ve done a far better job of serving the entire urban area since then.

King Plaza, in the Othello neighborhood of Seattle, is a great example of what we’re trying to do across the country. Check out the service area below and a fun video of a ribbon cutting here. It’s located in an extremely racially diverse and dense urban neighborhood, with moderate income and historic pollution impacts; The site itself is filled with small businesses; There’s literally dozens of ways for drivers to make the most of their time while charging. 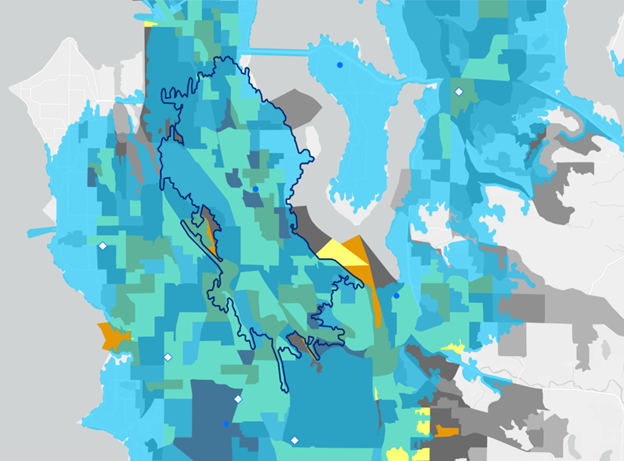 We can say with confidence that most of our urban service areas look like this, with measurable, visible progress, and far more stations in our new development pipeline than our existing base.

Where we need to go, and how to get there

Los Angeles: We still haven’t served South Central LA; see the map below. We have, in fact, nibbled away at the edges, but there’s still a pretty glaring “charging desert” there between the 110 and the 405. EVgo was the first network to install public fast chargers in Compton and Inglewood, and some more coming to Inglewood in the coming year should help, but we’ve also set this as a neighborhood-level target for our development group (helped by our recent proposed awards under the California Air Resources Board’s Sustainable Transportation Equity Project). 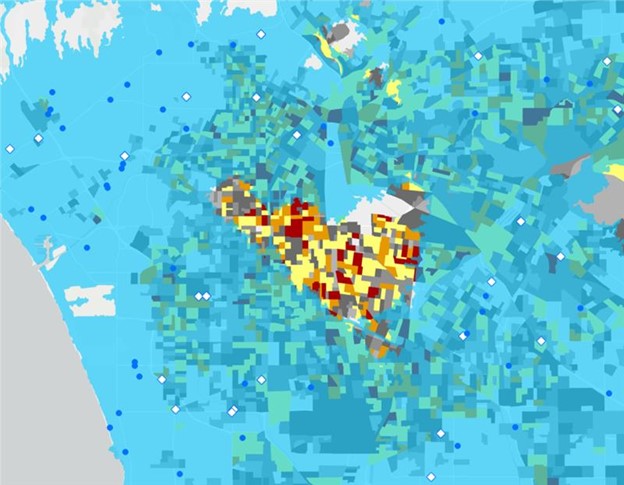 Similarly, while we’ve very significantly expanded service in Detroit, we still have a notable gap coming from the lake Northwest along Grand River Avenue (see below). 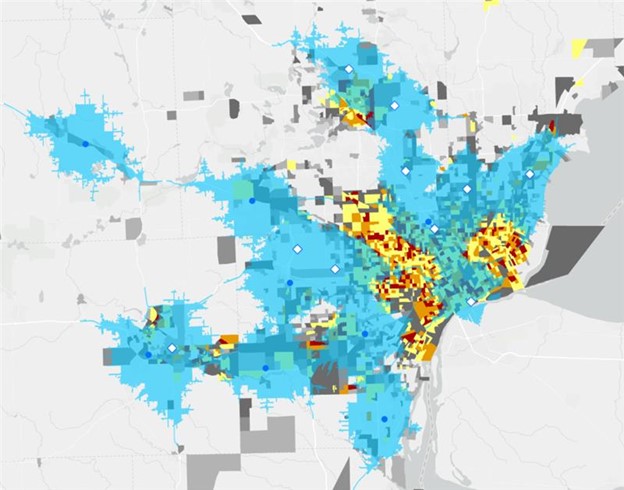 Generally speaking, in metros where we’ve noticed we are not improving our EJ Scores, we’re doing the following things:

Our automotive OEM partners are aligned with the mission, so we’re working together to extend our service to new cities and markets where whole markets may be lower income, more diverse, and more polluted than the average in their states; that’s underway and almost any service in those cities or their suburbs will help on the metric above.

So, we reached 50%. The reward for good work is more work…we need a new goal. We haven’t yet determined what that is but here’s what we are thinking:

These are open questions under discussion, and I know I don’t have all the answers. The broader EVgo data team is going to keep digging into it and we have lots more work to do on the journey to Electric for All.

The new Joint Office of Energy and Transportation has issued this map to let you see where corridors, tribal lands, and their definition of disadvantaged communities for Justice40 (their commitment to see 40% of the infrastructure investments go to such communities). The specifics of the criteria is not yet clear to me.

But I will also note that EJScreen is still out there. Justice 40 DACs have historically been the kinds of places where infrastructure is not adequate. EJScreen ones have that lack of infrastructure and notably polluted air and the demographics most vulnerable to those impacts. It’s not yet clear to me how they interact, but I think there’s something to be said for EJScreen’s refinement.

How can the public sector help?