Electric For All Starts at HQ

Over the last year and a half, EVgo has become a lot more engaged in actively thinking, talking, and acting on racial and environmental justice (EJ). Over two days late last year, the entire company blocked out two four-hour sessions to speak openly about diversity as it relates to EVgo and build on our plan for improvement on racial and environmental justice within our organization. We brought in an experienced facilitator from Overcoming Racism who led us through a workshop where we addressed a broad spectrum of issues. Parts were very uncomfortable. A lot of it was general and emphasized some of the important yet often unacknowledged history we all share; other parts focused on how EVgo specifically can be a more just and equitable employer and workplace.

But we’re also conscious that we have a special responsibility as a builder of infrastructure. In the U.S. in particular, infrastructure has a deep history in enabling or stymying environmental justice, from redlining housing opportunities to building highways to physically separate communities. So, when EVgo thinks about enabling Electric For All, that can’t just be making it easier for certain groups to access electric vehicles (EVs). What we build (or don’t build) will be (or won’t be) in the ground 10 years from now. And if we think we’re key to electric vehicle adoption, and that electric vehicle adoption is a key lever communities can use for cleaner air and more economic opportunity, it becomes our job to ask who gets that clean air and that opportunity. Of course, we have to do so in the lens of operating a sustainably profitable network – one that allows further investment and expansion in a network that serves all.

Personally, in my network planning role, I felt that being more conscious and intentional about justice in our siting process was the biggest contribution I could make.

So, let’s look at how we got uncomfortable, what we learned and how we realigned some of our tools to do better, and how we’re going to hold ourselves accountable.

To grapple with the challenge of where we site, we had to get specific about our goal, and tie it to data. In general, it makes sense to build chargers where the EVs are and will be. As a result, dense urban cores, which traditionally are disproportionately impacted by air pollution and more likely to serve communities of color, happen to be good places to locate EV fast chargers. But it’s not that simple, and in order to build chargers to serve communities equitably, we need to check our assumptions and be intentional about expanding reach to more drivers who might want and could benefit from EVs.

Working with that data internally, we decided that we could use it to set a goal to serve impacted communities, where. . .

Learning How to Know Better

For an example of what we found, let’s draw impacted communities in Atlanta with EJScreen using the ArcGIS tool. We’ll not draw anywhere with cleaner air, or below-average PM2.5 impact indicators. These areas are blacked out on the below image. Starting at “average,” we’ll draw them as a heat map from grey (just above average impact) through yellow to red (most impacted). We’ll also calibrate to the state level so it’ll be “most impacted in Georgia” not “most impacted in the US”.

You can see that the hardest hit communities are in a belt to the South of Atlanta, with significant concentrations of impact in the Southwest and some outer suburbs to the Northeast. Now let’s draw the 10-minute-drive areas from our existing chargers on top of that in blue. 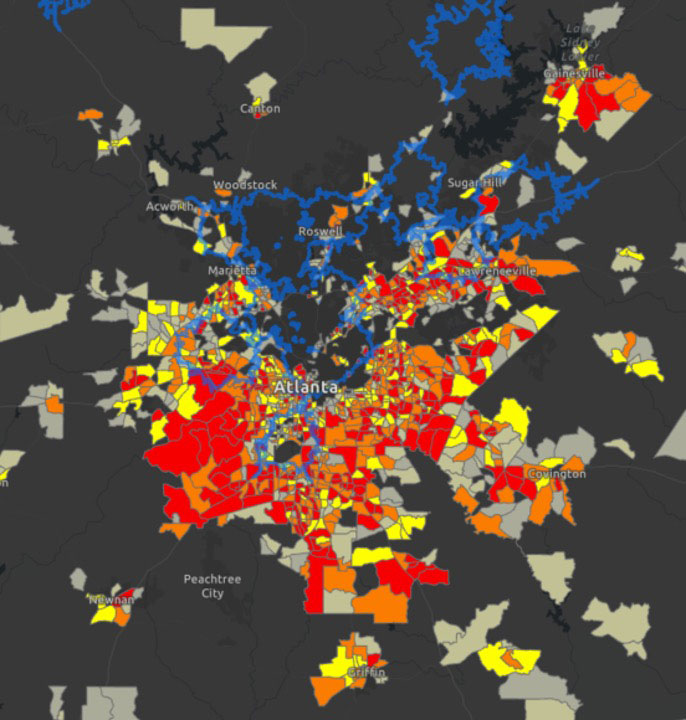 The lack of overlap shows EVgo doesn’t currently have a strong presence in the most impacted communities.

Atlanta is probably our most stark example. If we’re honest with ourselves, DC, Baltimore, Chicago all looked better - especially with our more recent station expansions in the mix. But not dramatically better. RMI has previously pointed out that LA looks similar . . . .

Some of the same factors that led to “downstream and downwind” minority and low income communities were leading these neighborhoods ill-equipped to take part in the EV revolution.

Gut check – is the Map telling the story?

The question on a map is always whether it ties out to reality; we have had a few chances to check ours anecdotally, and it “feels” right.

One example is personal; on a business trip, our CCO and I found ourselves with a few hours to kill, so we staked out one of our Atlanta EVgo chargers in order to talk to customers – as one does. That charger saw a lot of Lyft drivers, and one was willing to give us some of her time.

She told us flat out that she liked our chargers when she was near them, but that she did not always feel comfortable having to drive to “the white neighborhoods” North of the city to charge. It was one of the conversations that led to our Schlotzky’s Deli install near the airport (Southernmost blue blot above), additional proactive site development in other areas of Atlanta, and to our more extensive company introspection. 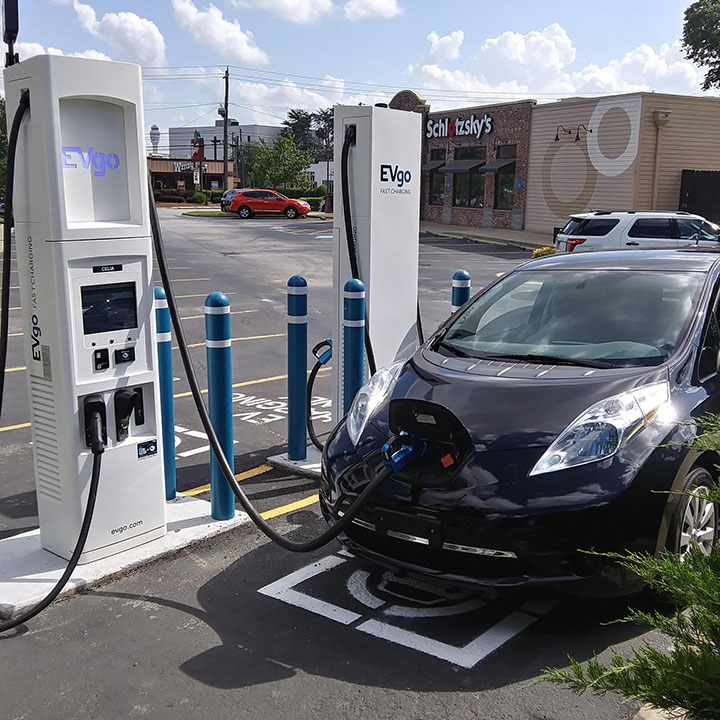 Starting to Do Better

The good news is that the network we’re building in the next few years is a lot bigger than the one we have today, so we can shift these maps if we’re intentional about it AND get our partners on board.

EVgo works with large retailers and large real estate owners to host chargers on their property (and in most cases, EVgo pays them for each EV parking space). They know our contracts, they like the traffic we bring, and they’re good partners who facilitate rapidly building out the infrastructure the country needs. When you’re going as fast as we are you need those accelerating factors.

But if we exclusively look to where our site hosts already are, we are in danger of piggybacking on old siting decisions that were not as equity-conscious. In other words, we can’t challenge our own assumptions if we’re relying on another partner’s assumptions; they may or may not have had EJ front of mind when they did siting of their own. One of the things we found worked in Atlanta was good old shoe–leather lead generation; picking out ZIP codes we wanted to serve and overlaying that with our portfolio partners' sites as well as hitting the phones to potential site hosts we didn’t already have. 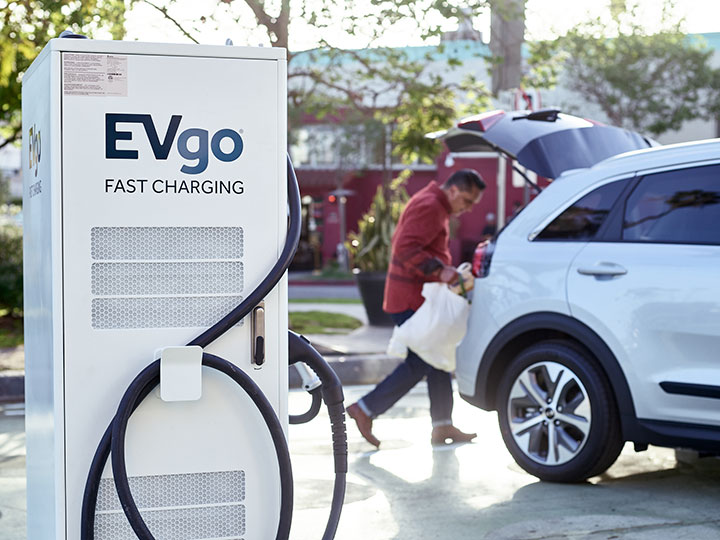 Doing better in a Pragmatic Way

I hear “oh that’s a nice site” every day. What someone thinks of as “nice” usually wouldn’t bear much critical analysis, but it bakes in a lot of cultural and individual priors.

We’re trying to move subjectivity to the end of our siting decisions, not the start. Our site location algorithms are extremely sophisticated; they’re also pretty secret sauce, but I can say, just between the two of us that they use [[REDACTED]] statistical methods to consider factors that range from [[SECRET]] to [[PROPRIETARY]]. They perform well, and they keep us from imposing our biases too early. I can say that what they don’t include is income.

They do of course include the best EV adoption data we can get. Given early adoption curves, that itself can be an income proxy, so to balance the scale we include EJScreen factors as part of a sites’ “score”. We also include information that, all else equal, tends to favor spread of sites over concentration.

At the end of the day, “the map is not the territory” and you have to bring some knowledge of place to reach equitable siting decisions. But as our SVP for Delivery, Marcy Bauer, says, “nice breaks ties”.

Help Us Do Better

It feels like transportation policymakers focused on equity are focused on urban populations. But urban populations have powerful factors that drive infrastructure development. The equation is simple: density favors utilization, and so do apartments (which tend not to have as much access to driveway or garage charging.) By no means do these fully make up the distance created by lower EV adoption among lower income people, but they do pick up some of it.

Deploying in rural areas is the harder nut to crack – and the current orientation of both charging rebate programs and legacy rate designs makes this issue harder. Building a rural or corridor charging station is challenging from an economic standpoint – and operating it takes a lot more (remember those boots on the ground noted before?). There are some smart designs out there that help with this, but we’re all still learning.

For those that say Program A or Provider B is the best method for bringing about equitable charger coverage, or state that the current model is not serving that end, we should all ask what their model is, what their criteria is, and how they’ll be held to it. If they meet or exceed goals, we should make it public so we can all continue to improve. But simply stating that private providers won’t or don’t serve low-income populations, or don’t consider justice concerns, isn’t good enough.

We often see rebate programs emphasize or require the ability to expand existing sites in future. But in the current state of EV infrastructure adoption, should we be putting dollars in the ground at existing sites to make them cheaper to expand in future? Or should we be emphasizing more locations, faster to expand access to new communities? I’m not sure there’s a right answer, but it shouldn’t be taken for granted.

Right now, EVgo’sBoard-reported metric is focused on increasing the average EJScreen score? PM2.5 state index in areas within a 10-minute drive of our chargers. Our maps should have more blue around more red.

It’s currently below average. Not in every market but nationwide. We’ve committed internally that that number will increase, for operating chargers, every quarter. We’re also conscious that no tool is perfect, so we will keep evaluating not just how we perform but what we need to measure and how.

That said, it’s in our site selection methods, it’s reporting up to managers and in evaluations, and we have good reason to believe we’ll achieve what we manage towards.

We are committed to doing better in our own organization and on the ground where we serve drivers and communities across America. To learn more about EVgo’s efforts to promote equal access and our company commitment visit our website. We have outlined some starting points and set metrics to track our progress...and we look forward to learning more, having more hard conversations, and reporting progress in the future.