With record year of firsts in 2019, EVgo is leading the industry on renewable energy, Tesla connectors, and network growth

LOS ANGELES – March, 02, 2020 - EVgo, the nation’s largest and most reliable public fast charging network for electric vehicles (EVs), today announced the opening of its industry-leading 800th fast charging location. The new four 150kW EVgo fast charger station is located at a Sheetz convenience store in Chantilly, VA, and was built in partnership with the Virginia Department of Environmental Quality as part of the Drive Electric Virginia initiative. All 800 EVgo fast charging locations are open today, with dozens more in construction and under development and many more to come as EVgo continues to expand.

The company’s network growth news accompanies the release of EVgo’s 2019 year-in-review highlights, which includes industry-leading milestones such as EVgo becoming the first public EV fast charging network in the U.S. to be powered by 100% renewable energy and the first EV charging network to offer integrated Tesla connectors on its owned and operated fast chargers.

EVgo was recently named to the Global Cleantech 100 List and honored as one of two Rising Stars of the Year in recognition of the company’s growth and innovation, selected from more than 8,300 global nominated companies from 80 countries.

“With the opening of our 800th fast charging location, EVgo is continuing to lead the industry in making it easier for Americans to go electric,” said Cathy Zoi, CEO of EVgo. “Today, with over 100 million people living within a 15-minute drive of an EVgo fast charger, EVgo and its customers and partners are helping to clean up the air and tackle climate change.”

EVgo opened 75 fast charging locations across the country in 2019, or the equivalent of more than one station opening per week. Nationwide, EVgo serves more than 200,000 customers who drive a broad array of fast charge-capable electric vehicles available today, including the Nissan LEAF Plus, Chevy Bolt, Kia Niro and Tesla Models 3, X, and S. EVgo, in partnership with ChargePoint, also implemented the nation’s largest public roaming EV charging integration in 2019, enabling access to more than 30,000 public chargers on both networks with a single app and no roaming fees.

In California, where more than half of the EVs in the U.S. are currently located, EVgo’s network of fast chargers grew by 40 percent in 2019. EVgo manages more than 300 fast charging locations and 750 fast chargers across the state, connecting more than 80% of Californians to an EVgo fast charger within a 15-minute drive. In 2019, the company opened seven EVgo Equal Access Charging Hub (or EACH) locations in California communities most impacted by air pollution – including Anaheim, Compton, Inglewood, Richmond, and San Leandro – helping to promote electrification for all.

In 2019, EVgo expanded its longstanding partnership with Nissan to build more than 200 additional fast charging stations and to launch a new charging credit program, Nissan Energy Perks. EVgo also built on its industry-leading work in electrified rideshare through partnerships with GM’s Maven Gig, Lyft, and Uber, as well as the continued powering of electric miles for other fleets across the U.S.

EVgo is also a leader in partnering with government agencies at the federal, state and local levels to spur EV adoption and promote transportation electrification, working closely with the U.S. Department of Energy, the Virginia Department of Environmental Quality, the California Public Utilities Commission and the California Energy Commission, the Washington Department of Transportation, and siting public fast chargers directly with local governments from Richmond, CA, to Richmond, VA, and beyond.

LS Power’s January acquisition of EVgo further enables the company to accelerate growth in charging stations across the U.S. 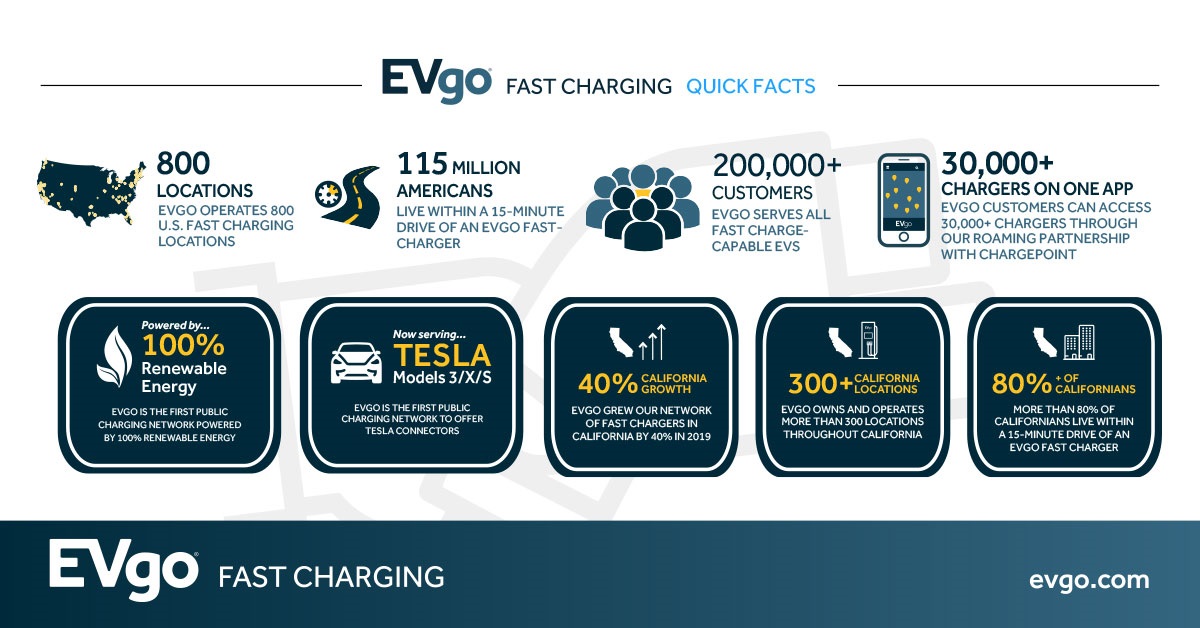 EVgo is the nation’s largest and most reliable fast charging public network for electric vehicles, powered by 100% renewable energy. With 800 fast charging locations in 66 markets in 34 states, EVgo serves more than 200,000 customers. EVgo has the best operating record in the industry – more than 98% uptime – and consistently earns the highest consumer scores on PlugShare for U.S. public charging networks. EVgo owns and operates its nationwide network of fast chargers, which are compatible with all fast charge capable EV models. Founded in 2010, EVgo partners with retail hosts, hotels, shopping centers, gas stations parking lot operators, and other stakeholders to make it easier to fast charge your EV close to where you live, work and play. EVgo is also committed to providing a reliable charging experience for customers of partner automakers as well as fleet and rideshare operators.